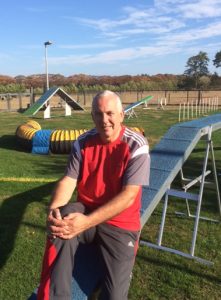 My name is Ton van de Laar and I´m a Dutch agility judge.

I started in 2000 as an agility judge. Since then I have judged many competitions, in the Netherlands but also in many other countries. It’s always interesting to visit other countries and get new experience and inspiration.

My courses are based on good cooperation between dog and handler. The course should contain a natural line for the dog with a good combination of technique and speed. A course should be challenging but also exciting for an audience to watch.

I have already judged the Border Collie Classic twice before; once in Luxembourg and once in the Netherlands. I feel honored to have the oppertunity to judge the BCC for the third time. I look forward to this competition.

I wish everyone good luck but certainly a lot of fun.

Since 1994 I am addicted to any kind of dogsport. Over the years I have trained puppies, obedience and agility dogs. Since 2000 I am teaching abroad and due to this international experience I was able to gain more knowledge. I have learned so much from all the different agility handlers from all over the world.

I participated a couple of times at the FCI Agility Worldchampionship and at the FCI European Open. Since 2011 I am the head coach of the German National Agility Team. Agility took completely over my life and I am still fascinated of this amazing dogsport – as a handler, a trainer and even as a judge.

I wanted to know more about agility and since 2006 I am an agility judge. Only 4 years later I became an international agility judge. Until know I have been judging more then 350 competitions (140 abroad).  Some important national competitions I have been judging: German Championship, German Classics, B.A.C.K., tryouts for AWC. I have had the pleasure of judging selections and trials at competitions abroad, in countries including Switzerland, Austria, France, Luxemburg, Spain, Italy, Hungary, Slovakia, Czech Republic, Poland, Russia, Estonia, Sweden, Norway, Finland, Colombia, Chile, Argentina, Brazil and Japan. Some important events: tryouts for AWC, Norwegian Open, American& Caribbean, Swiss Championship, Gotor Cup, Moravia Open, Finish Open, I.A.B.C., Luxembourg Open.

I like building courses which are smooth and fluid. In my courses handlers and dogs need to know some good handling skills. My courses are very selective for those who know how to handle the dogs line. In my opinion, the basic agility education for dogs is very important in order to have success at trials and of course in my courses.

It would be a great honor to have the opportunity to judge the Border Collie Classics.

I am looking forward to offer the agility handlers challenging and interesting courses.

My name is Norbert Behren.  I am 55 years old.  In 1999 I am starting the sport „Agility“ with my first Border Collie.  In 2002 I had my first competition in the Netherlands and I run in one year from the lowest level to the highest.  From 2003 I attend in many completion in Germany with big sources and the participation on the German masters.  In 2009 I got the authorization to judge national and in 2015 international competitions.  I am happy to have the possibility to judge the “BCC 2019”.  Thanks a lot for the invitation.  I am sure that will be a great competition. 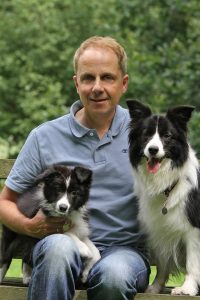 I have been running Agility since 1992 and in this time I had many different dogs (including 6 Border Collies) in this sport. For several years I run a small border collie breeding with 4 litters.

In 2000, I started my career as an agility judge and in 2002 I gained international status. I have judged many championships and qualifications at home and abroad.

Professionally, I also deal with the topics of dog training and behavior. So I have the diploma in pet behavior and training of the COAPE Institute in Great Britain and work for many years as a behavioral consultant, trainer, seminar leader and author.

I’m looking forward to visit one more time the Border Collie Classics and see lots of great runs of my fascinating favorite breed. 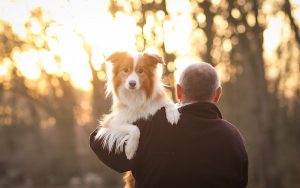 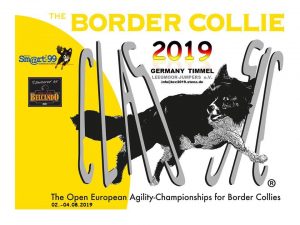